Mike Sonko is living the dreams of some of us. I mean it. See what you sit down and imagine you will own when you grow up, well, Sonko already owns it. During the weekend, I had the fortunate chance of visiting his family farm in Mua, Machakos county. At the time of writing this, I struggle to find the right words to describe what I saw, and experienced.

I was excited. I had never met him personally. I was eager to see his character, style, house, family and just how he lived away from work. I have always wondered what it is like to be say, Barrack Obama, Donald Trump, Uhuru Kenyatta, William Ruto and even Mike Sonko. I would like to get a feel of their personal lives. How do they think? How do they make money? How do they handle all that is on their plate? How do they spend the money they earn? How does it feel to be super rich? I was trying to have a conversation about this with Carl, one of my workmates, but he couldn’t stomach my ‘blindness’.

To be honest, my excitement increased a number of degrees after the mention of “kakitu”. After all, who gets sad and starts to cry when they are told that they will be given some money!

We branched off  Mombasa road to Mua Hills road, a few kilometres before you get to Machakos junction. The road was good. Tarmac was black and the yellow line was yellow. It was exceptionally smooth and well maintained, and clean since we did not come across a pothole or litter the entire time we were on it. Aside from that, there were no bumps at all. It took time for me to notice that the road had very little traffic. I counted only 3 cars the whole time, with no bicycles and motorbikes. Occasionally, we would come across herders with their cattle, and they would stare at our car until it disappeared in the distance. Their reaction made me think that they do not see vehicle pass here a lot, unless they were Mike Sonko’s. Could it be that this road is privately owned by Sonko?

From somewhere down the hill, we could see the Kenyan flag dancing in the air and we knew that must have been it. After about 20 minutes on this barren road, we came to a place with very high walls, that were painted orange and white. The top of the walls was layered with barbed wire, and every corner had security cameras. We stopped at the gate, where a soldier – not soja – came to meet us and inquire about our presence at honourable’s gate. The gates were massive and painted black with a bit of orange. Beside them, two huge lion statues ushered you into the premises, and a big tablet written “Sonko’s Family Farm, Mua”. After a detailed security check that mirrored UN’s, we were allowed in.

All you could here in the car was “Oh my God!”, “Wah! Wah! Wah!”, “What?!” and other exclamations of utter awe! His house – sorry, MANSION – sits on a hill. As we approach the front side, we are met by a spectacular view of the vastness of Machakos, Kajiado and Nairobi counties.

The view is similar to what you see from JKIA’s control tower – for those who have been there, or KICC without any other tall buildings around it. You see to the limits of your vision. Could it be that he bought this entire hill and built on it just so that he could enjoy this view?

On the verandah, a fleet of Mercedes Benz coupes and sedans rest their expensive bodies facing the front the house, their trunks to the emptiness behind.

I counted 14 German machines, with the exception of his motorcade (composed of several Land Cruisers and BMWs) and his wife’s convoy (that involves some Land Rovers and Land Cruisers as well). There was a cleanliness about the vehicles that was not with people who drive Toyota Fielders and Nissan Tiidas. Anyway, usiseme Kenya haina pesa, wewe ndio hauna pesa.

We were shown where to park the van, then welcomed inside. According to Tuko.co.ke, the house is estimated to cost around 150 Million Kenya Shillings. I’ll tell you, the Bible says “..I shall make you dine with Kings.” I, Oliver Kagwe, who lives in a small overpriced SQ in South B – and that has a chronic water problem – was stepping into a multimillion shillings house! Praise the Lord!

The floor was seriously clean, tempting me to bring my village habits of removing shoes at the door step. The maidservant noticed what I was about to and signalled that it was just fine, I didn’t have to remove my shoes. God is good because my socks had a hole on them, and my shoes often do a terrible job at maintaining a fresh smell.

The living room was huuuge! It had massive windows that allowed us to have the same scenic view as from outside. As you would expect in any Mkamba’s home, there was a lot of yellow, orange and white. We sat into seats that sunk in nicely, cushioning our buttocks in a most comfortable way. It reminded me back then when he was a Senator, saying that the seats in parliament should be cushioned nicely so that when MPs fart it doesn’t make too much noise. Sigh!

There were several glass coffee tables arranged around the room, and a fluffy silver coloured carpet that covered most of the floor. On the walls were paintings and images of Sonko and his family, as well as 5 big smart tvs each with a go tv decoder of it’s own. There were 2 massive electric fire place heaters that warmed up the room, since it was cold from the space inside and outside it. 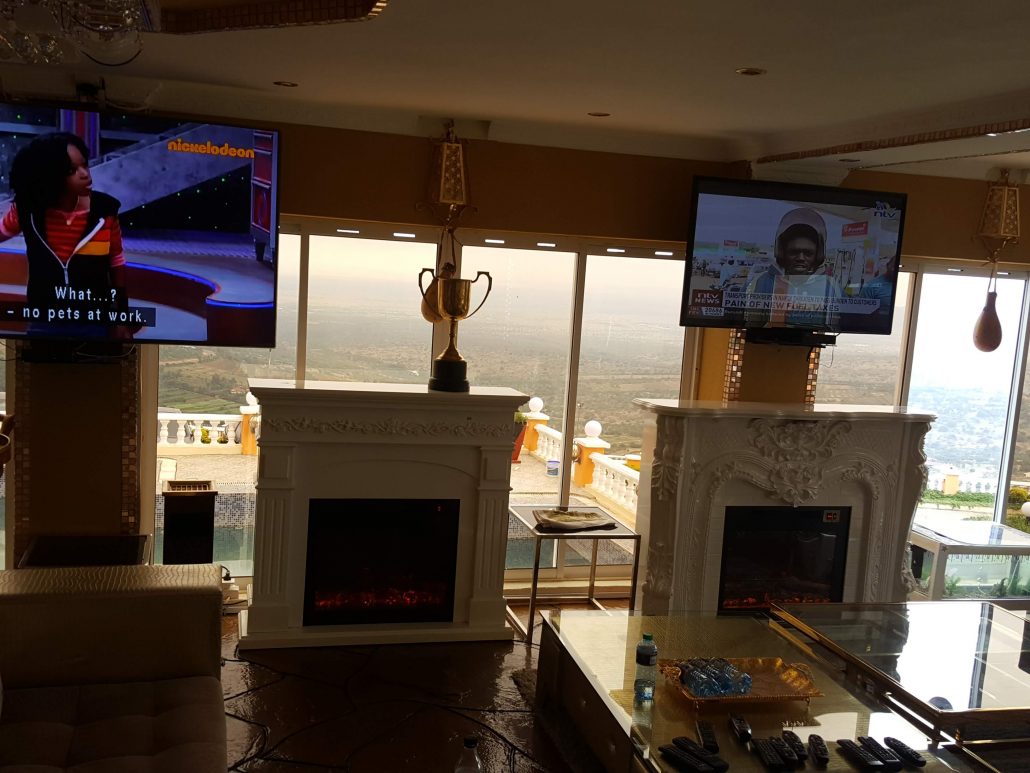 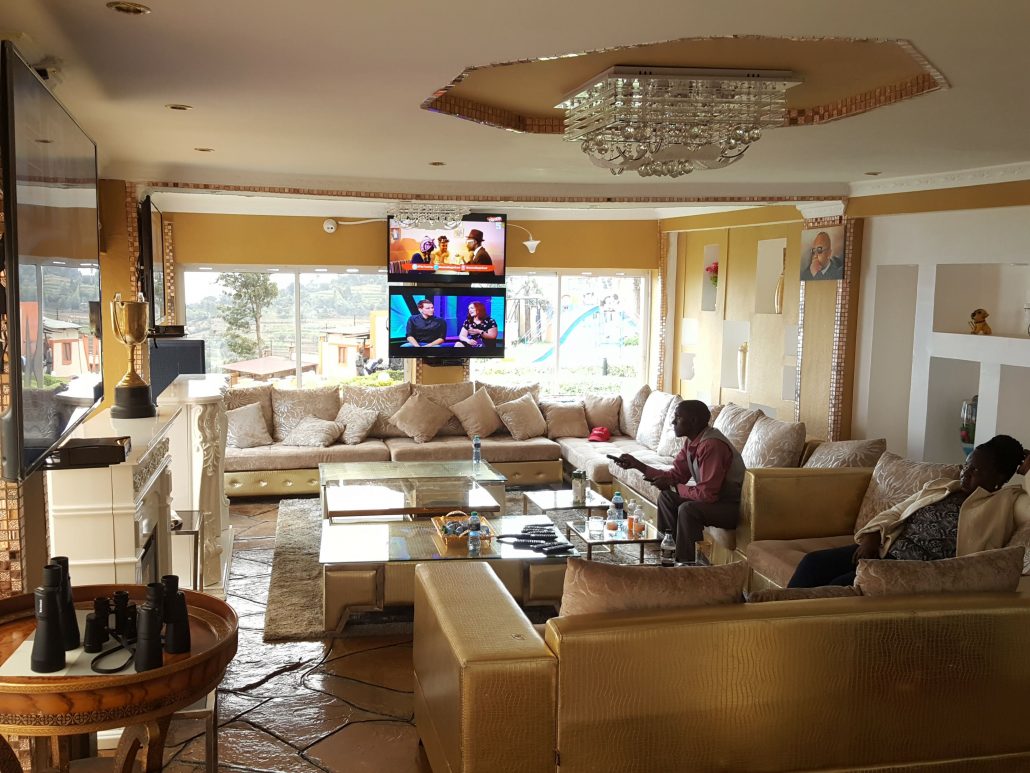 The most interesting part was a particular corner of the living room. This corner looked like a bar straight out of Sarova Stanley. It had expensive single malt whiskeys, wines, rum, vodkas and brandies. Rows and rows and rows and rows and r……. of costly liquor decorated the corner, leaving our mouths gaping and salivating. This is not all. He has another room, that is more of chilling spot that has even more alcohol. I bet his liver is either; failing, just about to fail or has failed and was replaced. 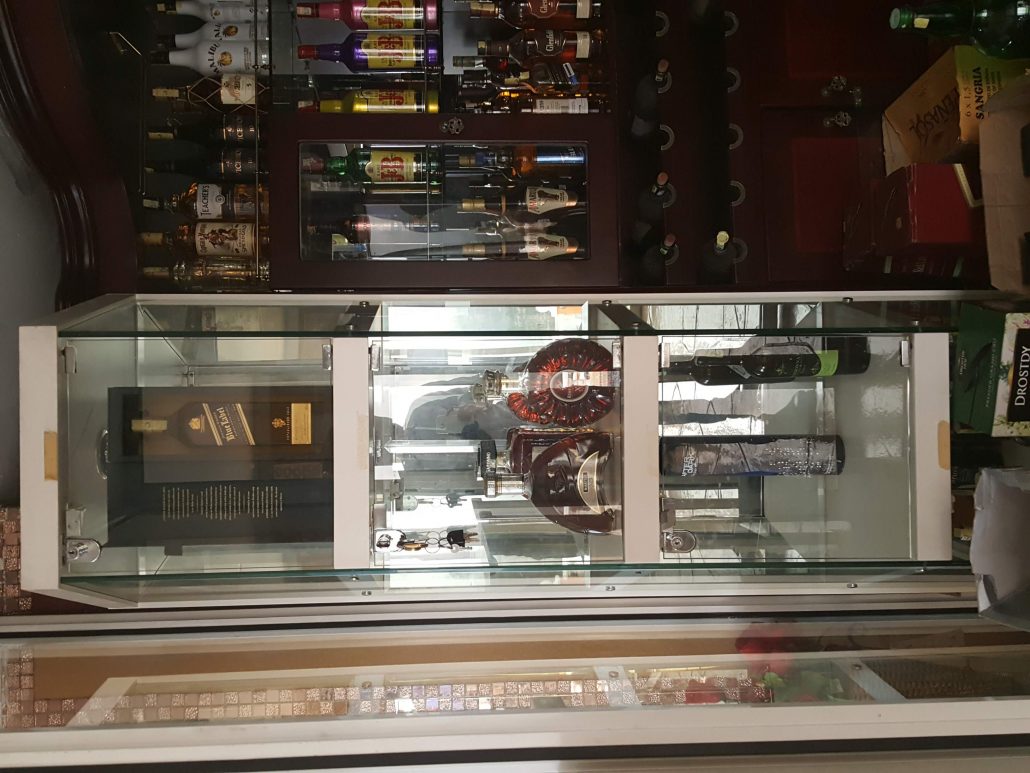 Corner of the sitting room 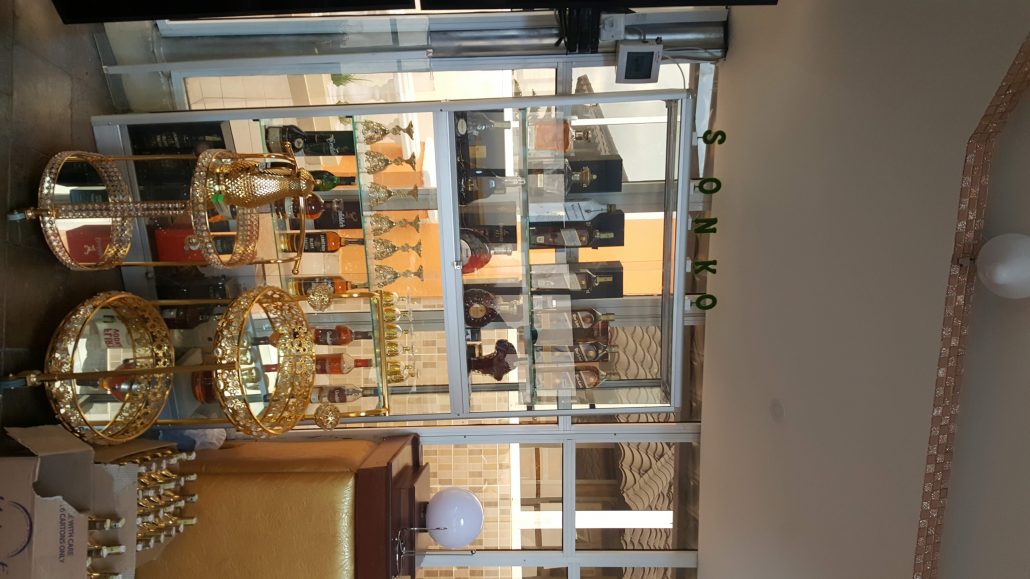 The house has an office space – from where he runs Nairobi sometimes, a dining area that can accommodate about half your clan, a kitchen the size of half your 3-bed roomed house, bed rooms enough to contain all your relatives and more toilets than there are in your neighbourhood. His electricity bill is paid in cheques and water running from his taps can solve South Bs water problem.

He has obese cows like the ones you see at the trade shows, 3 different breeds of chicken, peacocks, guinea fowls, ducks, geese, parrots, ostriches and horses. If a fire (and God forbid) was to break out and his employees had to run to save their lives, they would cause a catastrophic stampede.

We did not find him as we had planned. Instead, we found his wife, Primrose Mbuvi, and their daughter, Sandra. I can tell you one thing for sure: they are super welcoming. She and her chefs prepared us a buffet for lunch, and later took us on a tour of the compound.

As I drank down my glass of mzinga ya Viceroy, I stared hard at my reflection on the golden table, and thought studiously. I observed how at peace I felt in this environment. There was no strife. The body just relaxed. The eyes enjoyed the view of the setting sun, the skin felt the gentle touch of wind, and the soul, I don’t know if I have a soul. I wondered what it would take for me to acquire such levels of wealth. Is it education? Creativity? Should I grab some land? Corruption? What?

Time came for us to leave this paradise and return to our less interesting lives. We thank heaven we were drunk otherwise we would be depressed folk.

Previous
Jalopy.
Next
My Idea Of Leadership.

This site uses Akismet to reduce spam. Learn how your comment data is processed.

Oliver Kagwe
3rd September 2018
Previous
Jalopy.
Next
My Idea Of Leadership.
You might also like
One of the following
22nd February 2022

Voter Apathy Is Real Amongst Youths

Moving Away From Tax in Taxnation

All stories by:Oliver Kagwe
Join OK
Login to OK
Reset Password
Enter the username or e-mail you used in your profile. A password reset link will be sent to you by email.