Is Anyone To Blame For The Inequality Of The World?

Is Anyone To Blame For The Inequality Of The World?

Growing up, I was always angry at my mother and my grandmother for not working hard enough to buy me the things I desired. Things that according to me, were basic things to have because every other kid in my neighbourhood had them. Things like a bicycle, remote controlled toy cars and a leather football. I knew they both had a job and that they came home tired all the time. But there was no money in their handbags. I was brought up to know that if you have a job, then you have money, and that is in part why everyone insisted that we work hard in school and get good jobs. My mom was a nurse, and my grandma worked in the chief’s office. Good jobs no?

To be honest, this argument made sense to me. Thinking literally, I could not picture a woman in her nice suit and heels working a spade to mix concrete. Or a man in his white shirt chopping nappier grass for the cows. As I grew a little older, I would read that poverty is a state of mind… poor people are lazy… poverty is a consequence of natural selection… Rich people are evil… etc. And quite shockingly, poor people believe these things too. It is preached to them in their churches. 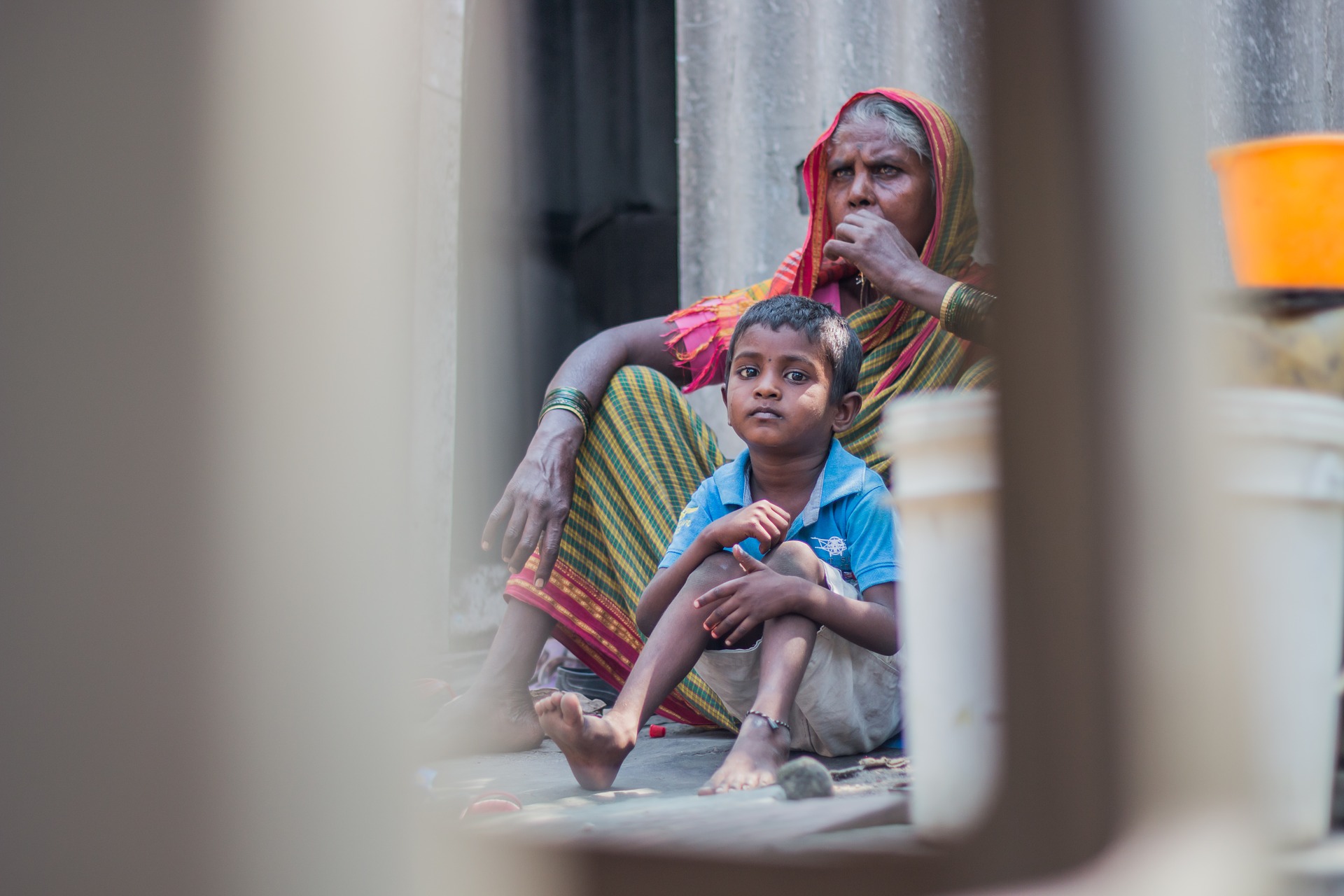 Grandma and child chilling in need.

Now, having grown up, I came across the word “Inequality”. It is a word that means complex things. To put it simply, it is the gap between the rich and the poor in society, caused by many social, political, economic and religious factors. It is that there are people who live in Karen yet others just across the road live in the largest slum in Africa.

The quality of  lives of people in these two places contrast like sunlight and moonlight. While others are stuck at the bottom of Maslow’s hierarchy of needs (food, shelter, clothing, sleep, air and reproduction), others are frustrated because they cannot seem to make a choice out of two 5-star hotels they that they desire to spend their vacations in. If I lived in Kibera, I would have to worry about my next meal, water for domestic use, school fees for my kids, the sewage passing outside my house, whether the toilet we share has someone in it because I am pressed, rent for my landlord, if I will get a job tomorrow etc. Basically, I would live a very frustrated life.

Inequality dates back to a date no one knows. It was there before the times of Jesus, during the times of Jesus and has prevailed even now after Jesus. It was made worse by slave trade and colonisation, wars and now technological advances. For many who are born either rich or poor, this is just how life is. We do not realise that it could be different because we do not know anything else outside of it. Does this then mean that we should keep living our lives the way we know how to? And anyway, isn’t nature running its course? Why bother the balance of nature? We cannot all be successful, can we?

Activists doing what they do best – shouting, marching and lifting banners.

If you asked me who activists are 3 months ago, I would have told you that they are people who seem to have excessive amounts of compassion and think they can solve the problems of the world by shouting and holding up banners. I still think that activists haven’t done much to make the world a better place, otherwise the world would actually be a better place. So activists came and they said, “rich people have made their wealth at the expense of poor people. They have robbed poor people, they have colluded with the government to make it easier for them to keep ripping off poor people and now we demand that this has to stop!”

They had a point. Rich people haven’t always made their money cleanly. They break the law and use their money to evade punishment. They pursue huge profits at the expense of their workers. They influence governments to put in place policies that favour them. Rich people have oppressed less rich people to acquire, keep and grow their wealth. But, fingers should not be pointed at them.

Activists seem to go after rich people. They seem not to recognise that for rich people to be rich, they also worked hard, invested, risked and failed just like everyone else trying to not be poor. They desired a good life and they went for it.

Am I saying that rich people are blameless? No. I am saying that the fingers need to be pointed towards someone else – the government. I am of the opinion that the failure of our governments is what has caused inequality in the first place. For instance, the government has the capacity to put in place and enforce laws and policies that safeguard the interests of both employers and employees. It has the responsibility to make sure that every member of society can easily access the services they require in order to live a decent life. If everyone had access to clean and safe drinking water, electricity, food, decent and affordable housing, decent work and a living wage, access to quality and affordable healthcare, quality education among others, then the stresses on our lives would be reduced, and we would be motivated to do better.

We (activists and nonactivists) should not demand for the benevolence of rich people to solve the problems of the world (they already are by the way – just look at who funds all these NGOs). We should demand and work with our government to implement the constitution fairly. And no, inequality can never go away, it can only be reduced. Everyone cannot be rich, but everyone deserves to be allowed to be the best version of themselves through access to unlimited opportunities and respect of everyone’s rights.

Previous
Ignore The pressure, It Is Okay.
Next
Before Life Sets You Free, It Beats You Up.

This site uses Akismet to reduce spam. Learn how your comment data is processed.

Oliver Kagwe
26th November 2020
Previous
Ignore The pressure, It Is Okay.
Next
Before Life Sets You Free, It Beats You Up.
You might also like
One of the following
21st May 2021

Reflections On The Mirror

The Relationship Between Value & Evil

Before Anything Else, We Are Human Beings.

All stories by:Oliver Kagwe
Join OK
Login to OK
Reset Password
Enter the username or e-mail you used in your profile. A password reset link will be sent to you by email.